We Lent pretty hard around here, so we Easter just as hard.  I’ve had candy and meat every day this week.  We even had Taco Tuesday… for LUNCH! With actual BEEF! #solYUMnity

Of course, people who don’t understand Lent think it’s similar to starting a new year and coming up with resolutions for self-improvement.  Really Lent is a time to try to become more like Christ, who gave up every material comfort (and he could have had ALL THE MATERIAL COMFORTS) so that He could show His beloved how to live with Him forever.  I feel like I’m explaining it badly.

Still, in striving to be  more like Christ, Christ can then make us stronger.  It’s not self-improvement.  It’s self-abasing so that Christ can be the One to lift us up… which is kinda the plan for the end of our days here, if you are in fact a Christian.

This was my Lent in a nutshell.

How’s your Easter going? What gifts has the Risen Lord given you as a result of your Lenten practices?  You might even be able to link up with CatholicMom.com and share your Small Successes, maybe? Not sure they do those anymore, but it’s still worth celebrating!

It’s time for Small Success Thursday, the empowering, delightful linkup over at CatholicMom.com where we celebrate the little things that mean a lot.

God is good, and this month He helped me with this stuff:

The gallbladder, after all these months, is scheduled to come out June 2nd!     I have anxiety about this, of course.  Yes, it’s a common surgery.  Yes, complications are even rarer than I like my steak.  However, I’ve realized that when you’re the person to whom something incredibly rare has already happened, the “unlikely” seems a whole lot more likely than it would to your average bear.  So I’m very anxious about this simple, easy surgery.  Pray, if you don’t mind?  Still, just having gotten not one but two doctors to hear me and not need a whole lot of convincing to give me a likely treatment is a huge success in the scheme of how my life usually works.

We are done with school for the year!  I really wanted to be a bit further along than we are, but technically First Shift is already well ahead of their actual grade level, and Second Shift is… well, not ahead by any stretch but certainly within two grade levels of where she is.  We made our required number of schooling days.  We can be done, so I let us be done.

I also talked to our evaluator about managing high school from home.  It all seemed to intimidating that I was considering sending them to school or at least doing a cyberschool.  Our evaluator has homeschooled her own kids through high school, though, and she demystified the whole process and made it sound… well, kind of exciting.  I’ve already convinced First Shift to give French a go for 7th grade (I used to be effectively fluent but have long since lost the skill but could teach it with the right resources at hand) with a trip to Quebec at the end of next school year as the carrot on their foreign language stick.

I’ve needed to add exercise back into my life.  Anything impact makes my asthma flare up.  I don’t have time to get to a gym.  My doctor recommended “7 minute HIIT” workouts, which did nothing but give me chronic tennis elbow and a terrible sense of ennui.  So… I looked up “belly dance” on YouTube.  After trying out a few different tutorial styles, I found Belly Dance With Talia to be simple enough for even me to start out using.  My morning workouts are now thusly:

I’m no Tiffany, but I’m certainly achieving better physical fitness than I would have done whining about how many workouts I can’t do.  Who knew you could break a sweat without even moving your feet?  I didn’t.  Now I do!

[The first one of you to comment with “pics or it didn’t happen” owes me a tank of gas. For the minivan, not the Prius.]

Took me long enough, but I finally requested a Mass be said for Scott Weiland.  It took so much courage to do that, people.The receptionist is about my age, and it went just about as I feared.

Understanding pleasantries were exchanged.  “Is 7am on August 25 okay?”

“That should be fine, thanks.”

Through blushing cheeks, I said, “First name is Scott.”

Receptionist wrote that in the book.  “And the last name?”

Receptionist’s pen hovered in the air while she processed what I was asking.  To her credit, she did not ask out loud if I’m bat guano crazy.  Anyway, the first one is done.  Let’s see how long it takes me to dig up the courage for David Bowie’s, though I can always ask for a Mass for David Robert Jones, I suppose.

What’s your success this week:  small, medium or large?  Share it on your blog and link up, or just comment here or at CatholicMom.com!

It’s Thursday, when we celebrate the good things of all sizes over at CatholicMom.com.

I’ve been writing!  Did you see how last week I talked about using Through Line from Method Acting as a writing tool? Here’s how it looks in my little world.  If you look SUPER CAREFULLY, like with a magnifying glass, you’ll get some spoilage for Never Let Me Down Again, the tentative title to the sequel to Don’t You Forget About Me.

Sorry.  Don’t know how I can make that bigger without blowing it out of proportion (literally).  Anyway, the way it works is the character’s name is in blue in the header.  The next cell down is the character’s motivation, WHICH MUST BE AN ACTION VERB.  Underneath that (and this part is a sunblock of my own invention) in brackets is the opposite of that motivation verb.  Why?  Because conflict is the engine of story, and every story must bring the characters up against the reality of having their motivations thwarted, complicated, and thrown into question. 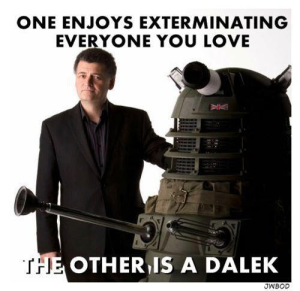 Moffat may drink our tears, but he knows what he’s doing.

Then the third cell down is a brainstorm of actions, body language, and/or images springing from the character’s motivation.  Want me to chat with your writing group about Method Writing?  Give me a holler. Let’s talk.  In the meantime, I pin Method stuff to my Writing-Related Pinterest board, so check that out as well.

Top Secret: I’ve somehow kept up my habit of exercising a bit every morning. To keep it from getting monotonous and to address what it feels like my body needs most that morning, I’ve been keeping a stash of different quick circuit training workouts on a secret Pinterest board.  Why do I keep this one secret?  For dumb reasons. But it works, so I that’s how I do.

Wheat in the heck? I try to live as authentically as I possibly can.  A bit of pride comes with that, in that I’m not one to follow trends, because they usually don’t feel sincere in my life.  But, hello, pride?  You know, the sin that says you’re better than everyone?  The Holy Spirit is always on the hunt for ways to get that sin out of my life so that I can really live without boundaries.  So my pride has gotten knocked down a bit in the past week, because now it seems my body wants to follow a trend.

I’ve been somewhat hypoglycemic all my life, but it got markedly worse after the birth of Second Shift.  I talked to my doctor last year in desperation and tried to follow all the hints for hypoglycemics: lots of fiber, low sugar, lowered fat, small meals, whole grains.  Nothing seemed to work.  So I’d eat a lower-calorie meal only to have my body 20 minutes later send me the message that IF YOU DON’T EAT A LOT OF FOOD RIGHT NOW YOU ARE GOING TO DIE.  You can probably imagine how hard that makes it to lose any kind of weight.  So in a year of trying to live like a hypoglycemic, I’ve thrown on about an extra twenty pounds.  It’s unbelievable, not to mention counterintuitive.

Last Thursday was very busy, and I’d eaten nothing but junk, junk, junk.  But it wasn’t until dinnertime that I realized I hadn’t had a single episode of low blood sugar.  I brushed it off as coincidence, but the next day when trying to pick something to eat for breakfast, I thought back to the previous day’s food choices:

…and not a single bite of wheat.  Dreading the result, I decided to give up wheat instead of flesh meat for my Friday sacrifice to see what would happen.  By Saturday morning I felt better than I had in years.  Years.

So I don’t know how it happens, but it seems that I like wheat but my pancreas doesn’t. I’ve avoided wheat all week and with the exception of the beer I had with hubs on Father’s Day (which, made me feel horribly shaky…and hungry, of course, for the next 24 hours), and the Eucharist on Sunday, I’ve been avoiding wheat.  And, well, I’ve been feeling much better.  My belly also has lost a lot of bloat, and I have enough energy that my morning workouts are no longer such a pain.

There seems to be some sort of threshold (the wheat in Eucharist didn’t bother me, and I’ve had soy sauce with no reaction), so that’s good.  Also, knowing my body, I don’t plan on going cold turkey; the last time I cut an allergen completely out of my life, my next reaction to it was anaphylactic.  Um, thanks but no thanks.  So we talked about scheduling times when I’ll have, say, a donut, or tomato pie. 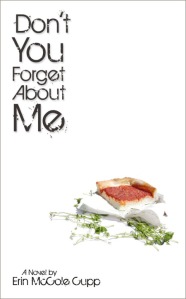 She says, looking wistfully at her book cover.  Anyway, if you have any favorite wheatless recipes Pinned, send them my way and I’ll add them to my Wheat in the Heck board.

What has gone right for you this week?  Join the Small Success Thursday linkup at CatholicMom.com!