Welcome, Tomato Pie Fans! I’m taking a hiatus from blogging to finish the sequel to DON’T YOU FORGET ABOUT ME. Meanwhile, I have a series of guest bloggers taking care of the place. Let’s meet today’s guest, Barbara Hosbach.

I’m working on my first novel and wondering what I’ve gotten myself into. I’ve been blogging twice a week for several years. I’ve had two scripture-based books and a number of magazine articles published. But this is different. This is fiction.

Fiction seems harder to write than non-fiction—at least to me. For one thing, non-fiction writers have a head start—reality’s already been created. Fiction writers have to start from scratch. It’s been said they’re like sculptors who have to make their own clay. More than that, the world fiction writers create has to be—or at least seem—more credible than the real world. Reality, no matter how implausible, has automatic validity. It really happened. Not so with invented stories. But most of all, when you’re making things up, the sky’s the limit. That can be intimidating.

It can also be exhilarating. I’ve already finished my first draft. That feels good, but it’s just the raw material. Now I get to shape that clay, to build up some parts and pare down—or even eliminate—others until the story’s just the way I want it. To guard against intimidation, I’ve given myself permission to take all the time I need with this process.

There’s a lot to consider in revising fiction. What’s working best for me is focusing on one thing at a time. The story I want to tell begged for a certain point of view and voice. So far, so good. I’m happy with the characters who presented themselves, but I’ve learned that characters acting at random doesn’t make a story. Their actions need consequences that lead somewhere. Shaping the overall plot and making sure the chapters and scenes lead from one thing to the next is taking some time. I’m letting that be okay. Fine-tuning and proof-reading will come later. As I said, this is my first work of fiction, so I’m no expert. Other writers may work differently, but if I tried to do it all simultaneously, I’d get overwhelmed. Then, instead of wondering what I’ve gotten into, I might be looking to escape. And there is no way I want out of this adventure—even if it is beyond my comfort zone.

Barbara Hosbach, writer, speaker, and retreat facilitator, blogs about scripture at www.biblemeditations.net . Her articles have appeared in a number of Catholic periodicals. Your Faith Has Made You Well: Jesus Heals in the New Testament, her latest book, explores what happened when Jesus healed and what it means for us today. Both this and Hosbach’s first book, Fools, Liars, Cheaters, and Other Bible Heroes, received the Catholic Writers Guild Seal of Approval. 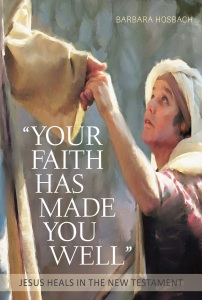