Welcome, Tomato Pie Fans! I’m taking a hiatus from blogging to finish the sequel to DON’T YOU FORGET ABOUT ME. Meanwhile, I have a series of guest bloggers taking care of the place. Let’s hear from today’s guest, Karina Fabian, author of the Mind Over Trilogy (among much else).

Have you ever struggled with forgiving someone, especially someone you love or who is close to you? It’s a difficult issue, especially when we believe we should do as Christ said and forgive seventy-times-seven times if need be. 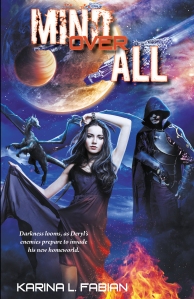 As often happens in my fiction, my characters explore issues I didn’t really think about at the time, but looking back, they have insights I can learn from. Case in point: in my latest novel, Mind Over All, the two supporting characters, Joshua and Sachiko, are on the verge of breaking off their engagement. Long before they met, Sachiko had had an abortion at the behest of her lover at the time. It was a wake-up call for her, making her dump the guy and change her life so that she became the kind of woman Joshua would fall in love with, but she never told him about the abortion. When they first met, he was still reeling from the fact that his own girlfriend had destroyed their baby without ever telling him she was pregnant.

By the time of the third book, they’ve been engaged for four years, and he’s forgiven his ex-girlfriend and even enlisted her help campaigning for a father’s right to know. Meanwhile, Sachiko still hadn’t told him. She kept waiting for the right time, kept stalling, and finally Joshua found out from someone else at possibly the worst time ever. Of course, now that the cat was out of the bag, she’s horribly sorry she never told him and wants to apologize and talk about it, but he won’t listen. He’s afraid to forgive her.

Why? It comes down to safety.

Even though Joshua was working with his ex, their romance was over. He knew she’d never be able to hurt him again the way she had. He knows how she thinks and how she works in a business situation, so he knows he can protect himself. Despite the pain she caused him, he can put it in the past because he feels safe. Thus, it’s easy for him to forgive her.

With Sachiko, the situation is different. He loves her, want to spend his life with her, and have as many children as possible. She said she feels the same way, yet she never told him this secret of her past (though he was very upfront about his). Plus, she’s put off the wedding date numerous times because she wanted to finish her medical internship. What if she gets pregnant at what she thinks is an inconvenient time in her career? She’s already has one abortion and has kept secrets from him. No matter how much he loves her and wants to trust her, he doesn’t feel secure in her. Thus, forgiveness is hard.

Joshua is lucky, He didn’t know the key element of Sachiko’s abortion: her lover at the time was a master manipulator, and Joshua knew him. (Another reason she never said anything.) Since Josh had seen this man in action and knew how well he could twist people’s minds, he was able to look at Sachiko’s situation with new eyes. Now, Joshua was open to her remorse, and he knew that with him, she’d never be in that situation again. Plus, he could see how she’d changed from the woman under Malachai’s spell into the woman he loved.  Once he was able to make that leap, he was able to talk to her and forgive, and they set a wedding date (the wedding happens in Hearts Over Mind.)

Nonetheless, that doesn’t mean we have to be martyrs. With few exceptions, which have to do with standing up for our faith, God does not expect us to knowingly put ourselves in danger. Forgiveness does not mean becoming a willing victim of a sinner. Find a way to make yourself safe. Not only will you make your life easier, but you will find it easier to forgive.
Incidentally, lest you think the Mind Over trilogy is all about relationship issues, let me reassure you. You will find sword fighting, talking animals, dangerous lunatics, aliens, and crashing planets. I hope you’ll check out the trilogy. 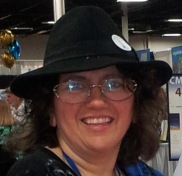 By day, Karina Fabian is a mild-mannered reviewer of business software and services for TopTenReviews.com. After hours, she’s a psychic intent on saving the world; a snarky dragon who thinks he saves the world all-too regularly, a zombie exterminator who just wants her world clear of undead vermin, and nuns whose callings have taken them off our world. Needless to say, her imagination is vast, her stories legion, and her brain crowded. When she’s not converting her wild tales to stories, she’s enjoying time with her husband, Rob, their four kids, and their two dogs.