God willing, on June 24 of this year, I will begin releasing my first novel, Jane E: Friendless Orphan as a series of ebooks.  Here’s the 2006 cover by Anthony Volpe: 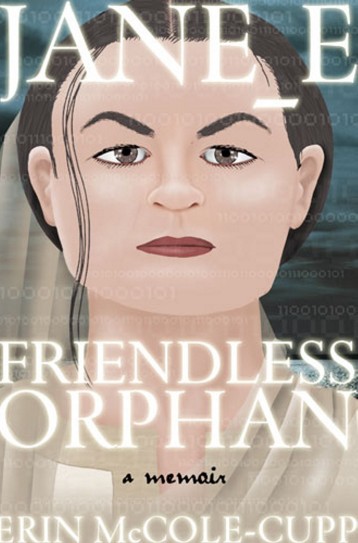 Unclaimed is scheduled for a June 24 release.

Look for Nameless in September.

Runaway should drop in early December.

I’m still waiting on the final cover design.  I also offered a free review copy of Unclaimed to subscribers to my newsletter.  I’ll probably be doing the same for Nameless and Runaway, so if you don’t subscribe to my newsletter yet, what are you waiting for?

So, Unclaimed… what are the ARC reactions so far?

“Science fiction readers will love the creative futuristic elements in Unclaimed by Erin McCole Cupp. At times humorous and other times heart-wrenching, this story delves into issues worth considering as society advances. Having developed a strong connection to Jane E, I found myself incredibly moved by a climactic scene where faith plays out in a natural but powerful way. Unclaimed: The Memoirs of Jane E will leave you wanting more.”  Theresa Linden, The Chasing Liberty Trilogy

“Jane Eyre does not need to be updated.  It needs to be read and re-read and treasured for its timelessness.  But too often, the people of a world obsessed with progress refuse to remember the wisdom of the past.  Sometimes, an author must dress the eighteenth century in futuristic salawar kameez to remind the present day that the human story never changes.  Whether in Georgian England or the global community of a technocratic future, there will always be orphans who can teach the rest of us how to love, if we will only take the time to learn.  This is the reason we need books like Unclaimed.” Karen Ullo, Jennifer the Damned

“This dystopian spin on Jane Eyre transports the reader into a world that, disturbingly, seems just around the corner. I was captivated by Jane E’s boldness and resilience as she navigated the challenging circumstances of living with a genetic defect in a designer-gene world. Erin McCole Cupp’s novel is a blend of three genres I rarely read (19th-century novel, dystopian fiction and fanfic) and it’s definitely a combo that works.” Barbara Szyszkiewicz, Editor, CatholicMom.com

“I really enjoyed [Unclaimed] because it was quite different from anything out there right now; the setting, the voice and the story… a good addition to any library or home.”  Anna delC Dye, Kingdom by the Sea

“Unclaimed, a remake of Jane Eyre, has all of the sophistication of the original and an intriguing, futuristic spin that makes the book hard to put down.”  Dawn Witzke

“This is a genre I’m not very familiar with, so my expectations were a blank slate when I embarked. Before I could catch my breath, I was completely absorbed into the setting, and developing a maternal love for the endearing main character, Jane. I so desperately wanted Jane to find hope, love and acceptance, and her journey towards these things resonated deeply within me. As well, the element of faith in this novel absolutely intrigued me, and I cannot wait to read more of Jane’s story!” Tiffany W., Life of a Catholic Librarian

“[Unclaimed] is a dystopian sci-fi take on Charlotte Bronte’s well-loved gothic/romantic novel. Jane Eyre, as a person and as a story, translates well into a new setting–a near-future cultural mélange that will make Browncoats smile while Bronte lovers nod along to the beat. Erin McCole Cupp has got something here. With barely a bump in a smoothly-written narrative, she combines faith and philosophy with a familiar-but-new story and delivers an ending that’s a pleasantly cruel tease of the gothic that will leave fans checking the release date of the next volume.” Joseph Wetterling, The Baptized Imagination

“As deftly and intricately woven as the ‘contracts’ that the Naomi girls produce in the story, Unclaimed tells the powerful story of Jane E, an unclaimed embryo who has grown up in foster care without the love of a family…. This is a riveting story, set in the not-too-distant future, that raises many questions about the morality of reproductive technology and the effects of it on a society that does not value human life for itself, but for what it can provide for others.” Amy M. Bennett, The Black Horse Campground Mysteries

“Unclaimed is a unique take on the classic Jane Eyre but it’s much more than that. When I started it I kept trying to compare it to the Bronte version but instead I ended up getting swept up in the story and just going along for the ride. The settings and cultural details of this world immerse you in the story. It really doesn’t matter if you are a Jane Eyre fan. If you like original science fiction then this is the book for you.” Sherrie Palmer, Sherrie’s Scriptorium

“What a great read! Jane E has Hollywood written all over it: strong, complex characters; rich settings, adversity, action and intrigue—it’s all here in this modern updating of Jane Eyre. I couldn’t put it down!”  Rhonda Ortiz, The Virtuous Jane Austen

“A brave and thought-provoking story rich with vivid details and authentic, memorable characters.” Therese Heckenkamp, After the Thaw

“This futuristic retelling of Jane Eyre is not only compelling and thoroughly enjoyable, it also evokes from the reader compassion for anyone who feels they don’t have a place in the world and helps them realize that all human life has value no matter how small or powerless. Are you a fan of science fiction? The classics? Then you’ll love Jane E!”  Laura Nelson, Seeking Suburban Sainthood

“Erin McCole Cupp has a gift for painting the social misfit in brush strokes so sharp and transparent, they cut you to the heart within a handful of paragraphs. I devoured this book and wait breathlessly for the next installment.”  Kathleen Basi

Thank you to everyone on the Unclaimed ARC team for all your time, energy, and kind words!