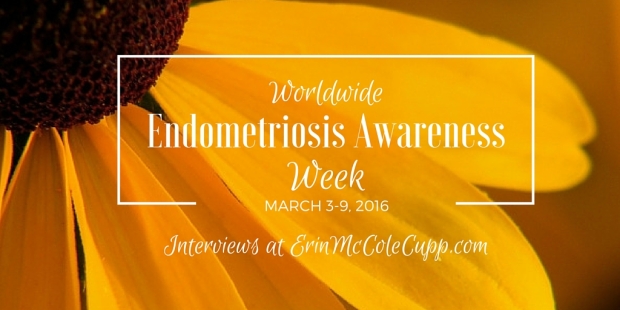 Endometriosis is a large part of the reason I wrote Don’t You Forget About Me , and this mysterious disease factors largely in the plot. I know, I know.  It’s counterintuitive to read a novel–not even a non-fiction users manual about a women’s health disorder but a novel–about a disease that affects an estimated 176 million women worldwide.

Why would we need a novel about endometriosis?  Because…

It’s victims are plagued by myths…

Just take this Pill and it will go away.

Just get pregnant and it will go away.

A hysterectomy will solve all of your problems.

It’s just once a month.  Can’t you just power through?

Yes, there are websites and books and even personal blogs on the subject, but to the best of my knowledge, Don’t You Forget About Me is the only novel out there that deals with this women’s health issue.

We need a novel about endometriosis because we need to see our stories told.

This week I will be running a series of interviews with endometriosis warriors telling their own stories.  I’m also offering Tomato Pie readers my novel Don’t You Forget About Me at the low, low price of 99 cents for the duration of Endo Week.

Has your life (including the guys here) been impacted by this misunderstood, myth-plagued disease?  Leave a comment and tell us YOUR story.