Flyby review of Not God’s Type: An Atheist Academic Lays Down Her Arms by Holly Ordway. 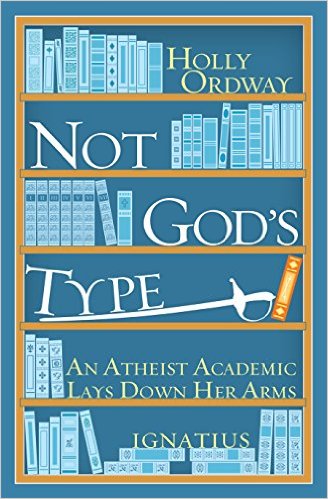 It’s been a long time (read: over 40 years) since I’ve read an apologetics text that applies merciless reason to the audacious claims made by Christianity but also applies literary analysis to Christian oral tradition to answer the question, “Is Jesus real or legend?”

As if that weren’t enough, it made me miss my too-battered-to-read-anymore copy of Gerard Manley Hopkins’s poetry.  Until the next royalty payment shows up, I’m satisfying myself with a library copy.  How long before they’ll make me give it back? I wonder.

Honestly, is there anything more terrifying for a nerd of any kind to stand up before her academic peers and admit to professing the most openly mocked, mindless sheep of a faith in quite literally the whole world?  And yet, that’s what Ordway does in Not God’s Type.  This is not a scientific proof of God’s existence.  Nor is it a spittle-flying harangue about how worthy God is of belief and you’re a heartless bastard if you don’t agree.

Instead, it is smart, honest, meaty, and courageous without the slightest whiff of sentimentality.  Ordway demonstrates that objective truth is not merely the domain of science alone but also of art (here, specifically, literature).

If you’re worn out from being considered stupid for saying you’re a Christian, this book is for you.  If you want to benefit from the keen eye of an intellectual as well as the heart of a lit-rit-cha fiend cast upon the light of the historical person of Jesus and his literary legacy, this book is for you.  Actually, if you’re an atheist who doesn’t trust people who approach you with “Jesus friendships” and could use some intelligent validation, this book is for you.  In fact, it’s probably more for you than it is for the rest of us.  After all, Ordway never mocks atheism and consistently shows its adherents nothing but stouthearted respect… which as a former atheist myself, is quite pleasant indeed.

Be smart, too.  Get yourself a copy. Like, now.

Yes, I hashtagged this What We’re Reading Wednesday, although that linkup over at Jessica’s HousewifeSpice seems to have ahem, fallen into disuse.  Will there be a revival elsewhere?  Stay tuned, mes amis.  Stay tuned.