This Ain’t The Lyceum does the 7QT thing.  Make with the clicky.

I wasn’t sure I had much to say about the World Meeting of Families. First of all, we didn’t decide until rather recently to attend WMOF (that’s the convention next week, at which we will NOT see the pope).  Then, even after we decided to go, that decision was made in the midst of starting our homeschooling year—my first year schooling kindergarten and middle school simultaneously.  On top of that, have I mentioned that I’m trying to finish drafting a sequel here?  And lastly… I didn’t think I had anything to say.  Nothing helpful to others.  Nothing that would be anything but navel-gazing.  Seriously, have you seen my navel?  No?  Then give the good Lord a nice, big “Thank You.”

Then this morning, someone on Facebook asked a friend, “What’s so great about Wawa?”

Hold the popephone. I may live on the border of Sheetz country these days, but I spent the bulk of my first thirty years under the warm glow of that golden rectangle emblazoned with the sleek silhouette of a Canada goose. You mean to tell me there are people who don’t know what’s so great about Wawa?

I have, my friends, found my WMOF blogging voice.  And thus I bring you… 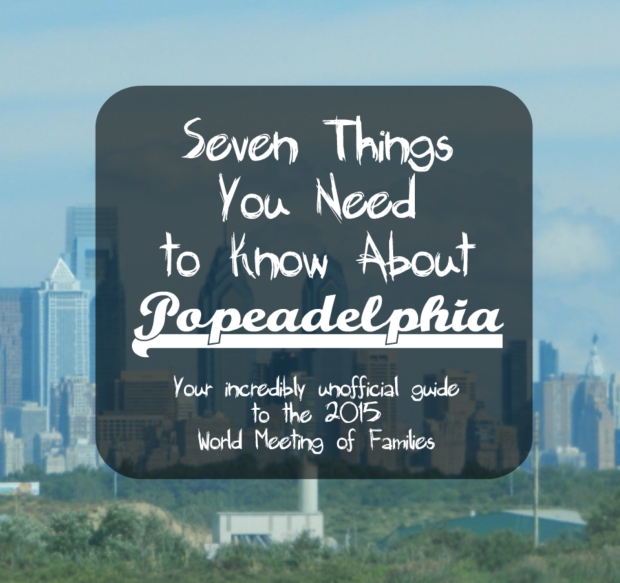 Wawa I may not have fresh insights to share about Catholic teaching on family life or why the feminine priesthood is different from the masculine priesthood, but by all the saints in heaven, I do know my Wawa.  For those of you not in the know, Wawa is a convenience store, but such a term does little to convey the glory that is Wawa. Their coffee is good.  Really good.  Most agree better than Sbux. They have all the coffee fixins out for you to work up yourself, so you can doctor yours up just the way you like it.  They also usually have about ten different roasts available at any time, and they’re always fresh, because everyone in the five-county area is always stopping in to pick up a coffee. 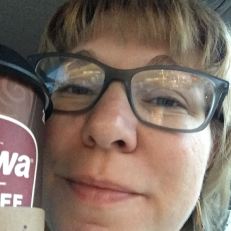 Even better is their automated, made-to-order hoagie ordering system, and that’s not just limited to hoagies, either.  You could get three square meals a day plus cheap drinks (hot or cold), plus dessert, all at your Wawa.  I believe the closest to the convention center is their fancy-shmancy new location with tables and seats and everything, so you don’t have to eat your hoagie on the street.  Seriously.  Wawa.

Reading Terminal Market is really close to the convention center.  As a result, it’s also really crowded whenever there’s a convention in town.  Forewarned is forearmed, but if you can brave the crowds, it will be worth your while.  Whatever kind of food you like, they are pretty much guaranteed to have it.  Known for:  Famous 4th Street Cookie Company (not on 4th street, but their parent, Famous 4th Street Deli is—worth the long walk if you’re up for it), Bassets Ice Cream, and Termini Brothers Bakery (I have waited in line for nearly an hour for one of their cannoli, and I regret nothing).  Our family tradition is to stop for smoothies at Kamal’s.  Second Shift of Kid may be big enough to get her own this year, which means I have nobody to share mine with.  Hmm…

Chinatown, which is almost as close to the convention center as Reading Terminal, in the blocks just north. Last I’d heard, Philly’s Chinatown is the second largest Asian neighborhood in the US, bigger even than New York’s.  In addition to rubbing elbows with the greatest evangelists of Catholic family life next week, we also are planning a stop for dim sum at Joy Tsin Lau. Back when I was a little less adventurous, my high school friends’ tradition was to stop for roast pork lo mein at Imperial Inn on our way to South Street.  I have been to Imperial Inn in more recent years, but I don’t think they’ve changed their décor since the first day I set foot within its plywood-paneled walls; thankfully, they haven’t changed their recipes, either.  I’ve never been, but Sang Kee comes highly recommended as well. Need something to keep the kids’ mouths busy between the WMOF and your hotel/homestay?  Pick up a little bag of White Rabbit taffy at any of our Chinatown’s ubiquitous grocery stores. You won’t hear from them again until the bag runs out.  And your dentist will love you.

Our Cathedral, the Cathedral Basilica of Sts Peter and Paul, is probably a good fifteen minute walk from the convention center.  Those of you from other places without Philadelphia’s history may think the place feels like, frankly, a dark tomb when the lights are down.  Take a moment, then, and reflect: the Cathedral was built during a rather dark time in our city’s history.  The Nativist Riots of 1844 were a very real problem, leaving dozens dead and wounded, churches destroyed and peace uneasy.   Catholic churches all over the city (and one convent) were going up in flames after bricks tied with burning rags were thrown through their windows.  Legend has it that St. John Nepomoucene Neumann hired the biggest, toughest Irish stevedores he could find and gave them bricks. He told them to throw the bricks as high as they could.  Then he told the architect to build the windows of the new cathedral just a bit higher than the bricks were thrown.

So if you feel entombed when you visit our cathedral, say a prayer for the souls on either side of the Nativist Riot who lost their lives during those dark days.

Getting lost in translation: The older I get, the thicker my accent gets, even though I haven’t lived in Philly for nearly a decade.  When I met my husband, I didn’t ask for a bottle of “wooder,” but now I do.  I recently realized that, the older I get, the more tired I am, and speaking with nice, General American Dialect takes more energy than I have to spare.

Sorry. Navel gazing.  Here are a few linguistic tricks to help you when you visit the neighborhood where the WMOF will take place:

Oh you can’t get to heaven

On the Frankford El

‘Cause the Frankford El

Only goes to Frankford.

It’s not just Chicago that has an el. Chicago, however, doesn’t have an el that looks and acts like a subway for 1/3 of its route.  If you’re looking for a faster, less-walking way to get from the convention center to Independence Hall and the touristy stuff in Olde City, somebody might tell you to take the el.  They mean get on the Market Frankford line (which you’ll pick up in the basement of Jefferson Station), head east, and get off at 5th Street.  Head south from there and, voila! History at your feet. Lots of food trucks,too.

As a side note on the language barrier, I present to you the declension of “you.” 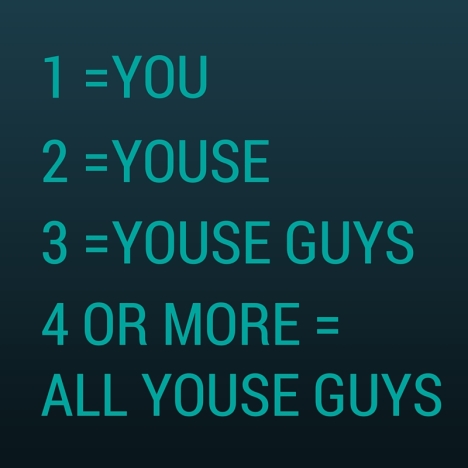 The whole cheesesteak thing: People will tell you not to go to Pat’s or Geno’s or even Jim’s, because that’s tourist food.  Honestly–and nobody I grew up with smack me for saying so–they’re all good.  Tony Luke’s seems to be the hands-down favorite of the natives, but plenty of little hole-in-the-wall neighborhood places have very good cheesesteaks.  If you’re pressed for time, then whachagonnado, unh? Not have a once-in-a-lifetime cheesesteak?  If you only have time to go to Pat’s/Geno’s or Jim’s, don’t hold out for Tony Luke’s and miss out on your only opportunity.

Anyway, wherever you go, the basic rules are as follows:

Example: If you want to order a cheesesteak with provolone and mushrooms but no onions, you say, “Can I have a steak, provolone mushroom without?” “Steak, Whiz wit” is a cheesesteak with onions and Cheez Whiz.  If this is a place that only sells steaks (and not hoagies, pizzas and cheese fries as well), you don’t have to say the word “steak.”   Because, obviously.  “Provolone mushroom without.” “Whiz wit.” “American green peppers and sauce wit.”  And so and so.

Oh, and don’t try ordering anything called a “Philadelphia Steak Sandwich” from your hotel.  That can only go badly.

Actual Sacred Sites You know how if you grow up somewhere, you don’t do the whole tourist thing?  There are a number of shrines in Philadelphia, all within easy public transportation or cheap cab ride of the convention center, that I’ve just never seen.  The best source I can think of for a better guide to those places than I could ever be would be The Faithful Traveler.  She came to our fair city as a grown-up, and her fresh eyes took in and bring to light all those things that I took for granted and never bothered to go see.  Check out her page if you are getting ready for your trip. If you can’t make it next week, watch the videos and made a virtual pilgrimage. Then, with your fresh eyes, tell me what you see in Philadelphia so I can wonder along with you.

While drinking my Wawa coffee.

Do you have any questions about getting around Philadelphia and enjoying the local culture?  Want to hear more about the WMOF from a native local’s perspective? Ask questions in the comments below! Guaranteed, if I can’t answer you, I know someone who can.