Let’s link up with What We’re Reading Wednesday over at Jessica’s Housewifespice Place.

It’s been months since I read these.  Now I’ll finally get around to reviewing them! 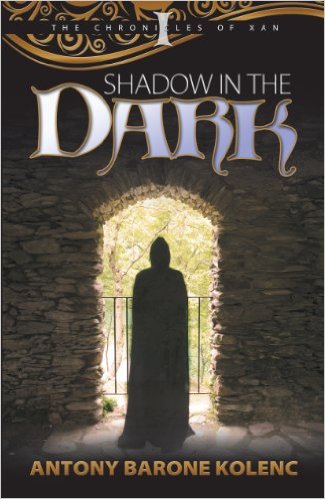 Here’s what it’s about:

The Shadow passed through the midnight chill, dark and silent. Two small boys peered down at it in terror. “It’s back,” one of them cried in a faint whisper.

Bandits attack a medieval village. A young boy is injured and loses his memory. He wakes up at a Benedictine monastery and is given the name Xan—short for Alexander. But when the monastery is raided and a monk is accused of a violent crime, Xan must uncover the truth. Could the raid be related to the one that destroyed his village? And what about the shadowy figure Xan has seen lurking on the abbey grounds at night?

Mystery. Danger. Adventure. It’s all here. And true forgiveness and courage too.

“A well-done mediaeval mystery, laced with plenty of action and a bit of downright spookiness.”-Colleen Drippe, Hereditas literary magazine.

“This could be the future standard for sound adolescent literature!”- Leo Madigan, The Weka-Feather Cloak.

I had fun reading this, and so did First Shift, a pair of eleven year-old girls who “aren’t girly,” for those of you who don’t know.  This little gem offers and more than delivers mystery, adventure, a richly imagined other world (after all, isn’t the past another world?), and characters who live and breathe in all their dimensions.  The red herrings even threw me off, which is a high compliment for a YA mystery novel.  The faith-related piece is handled organically and breathes along with the characters, feeling more like a part of the setting than of the plot.  I can’t recommend Shadow in the Dark enough!

Next up, confession time: these days I just wait around for authors to send me review copies.  It’s a very economical way of keeping one’s reading list affordable.  Specter, however, by John Desjarlais, I was not willing to wait.

I preordered the darn thing.  WITH REAL LIVE ACTUAL MONEY. You’re welcome, Professor Desjarlais.  Your question, though, Reader, surely is, “Was it worth it?”  HECK YES!!!!

Selena De La Cruz would like to leave the past behind as she plans her wedding … but the past no longer sleeps. In 1993, a Cardinal was murdered in Mexico at the Guadalajara Airport. Nearly twenty years later, the Vatican revisits the case … and finds that Selena’s family might have played a key role. Selena is forced to confront her family’s ghosts … in more ways than one…

This story deals with ghosts of all things–ghosts!–in a totally credible manner. One of the ways Desjarlais makes this leap believable is through the eyes of Selena’s skeptic fiance, Reed Stubblefield, whom we also first met in Bleeder (which you should also go read).  Selena’s family (both living and otherwise), personal history, and culture are depicted so naturally that I felt like I was sitting at the table in her godmother’s house, watching it all, remembering it all with them and wanting to protect my own heart, not only from the danger I could see coming but from the surprises lurking around the corner of every page.  The red herrings in this one got me, too, which I don’t mind one bit.  The pace was lightning-fast, the conflicts heart-racing and heart-rending, and the ending… well, you’ll just have to find out for yourself.  If Amazon offered a sixth star, I’d give it to Specter.