Elizabeth Scalia on Patheos has invited Catholic bloggers to respond to the question, “Why do you remain a Catholic?” I was thinking on this question and reading others’ responses, like Sarah Reinhard‘s and Barb S‘s.  Then I woke up this morning with the realization that I couldn’t possibly tell you why I stay without explaining why on earth I came back in the first place.

I’m a storyteller.  Let me tell you a story.

Once upon at time, many years ago, there was a little girl who loved nature and science and art all together.  Basically, she loved learning.  She was a nerd from the get-go.

Alas, she grew up in a world where adults weren’t to be trusted.  They lied to children.  They manipulated.  At best, they ignored them.  At worst, they used them for their own gratification and told the child it was her fault.  They put the “ME” in “The Me Generation.”  As for catechizing the little girl?  You mean, from the cafeteria line?

Anyway, this girl, while not a Millenial, did get sent to Catholic schools for thirteen years (kindergarten included) during the late 1970s into the super-early 1990s.  High school saw her progress from suicidal thoughts, to aggressive atheism, to a nice, bland “I’m spiritual, not religious,” agnosticism.  Her gods were her ability to read palms and tarot cards in the lunch room and at cast parties for modest sums.  Strangely, the only Catholic school lessons that did stick were the ones on abortion and, perhaps less so, the one on artificial birth control being bad for you, on a scientific level, mind you.  She couldn’t see past the science of them both.  So.  Remember, she’s a nerd?

Oh, and the whole “save yourself for marriage” bit:  see, it was the age when the world was being introduced to HIV/AIDS.  This girl had an anxiety about getting sick and dying a horrible death, so the whole “waiting” thing seemed smart, but it was not taught in a very cohesive manner, so she only thought she had to wait for some things.

And then she, her palm readings and her tarot cards got to college.  All she knew upon arrival was that she was a weird person whom people generally don’t like.  She didn’t know why she had trouble trusting and connecting with people.  Then she got cast in a play where she played a character who had faced similar (not the same, just similar) betrayals as she herself had throughout her life up until that point.  She broke down.  During rehearsal.  In front of the whole cast.

She didn’t know why.  She just knew something was even more wrong with her than she initially suspected.

She went home from rehearsal, curled up under the quilt made by her (devout Catholic) Granny, and stared at a wall.  She shook a lot.  She tried not to sob too loudly.  She remembered things she’d experienced and thought to herself, “That’s not such a big deal.  Why would something so minimal make me this upset? After all, everyone always told me that whatever I thought was making a big deal out of nothing.” But that thought did nothing to console or heal.  Whatever was going on was much bigger than she herself was.

Over the next days, weeks, and months, God (not the whatever, thankfully) answered her.  She did still own a Bible (for the intellectual exercise of reading it, like reading Thoreau), and she’d heard that the Psalms could be comforting, so she read those.  She also read about Wicca and Buddhism and Shinto and a whole alphabet soup of scavenging for Truth.  After about four months, she and her nerdy, metaphor-loving brain could find no more solid metaphor for God than the cross and resurrection.

Disappointed that she couldn’t find truth in nature worship or something cool like Eastern religion, she conceded.  “Okay, fine, God.  You want me to be Christian.  I’ll be Christian.  Just whatever You do, don’t make me Catholic.  The odds that I’d be born into The Truth are pretty darn slim to begin with, and besides that, nobody likes Catholics and their archaic, made-up beliefs that have no basis in reality.”

She joined the campus Christian fellowship, but in the interests of remaining open-minded, she still poked around the local Catholic community center. Except remember how she didn’t just like literature and plays and art?  She also liked science a whole lot and always felt kind of torn at having to choose a major?  Well, she loved nature.  A lot. Hence Wicca being mentioned first on the list above.   A girl who loves both nature and metaphor is a sucker for finding the logic in Natural Law, and a girl who doesn’t trust authority is going to mistrust what the culture says her.

She was talking to God pretty regularly at this point, and said, “Okay.  I can’t stand that this means that most of my friends are living in a way that is contrary to biological reality, but since I still get to love them, I can stomach it.  However, I still don’t get the Eucharist, Mary, or the Pope.  You’ve got some ‘splaining to do.”

The Pope was next: every play needs a director, and her life was plays at the time.  Easy-peasy.  Not like this:

The Mary thing was tougher.  Human moms are unrealistically held up as the height of perfection.  Mary was just another human mom, so what’s the point?  Funny enough, this girl was reading one of the most anti-Catholic novels every to be written just as she was struggling with this idea of Mary being a sinless intercessor for us with Jesus.  Goddess worship abounded.  But Mary couldn’t be God.  There’s only one God.  But upon closing the book, this girl virtually heard God say, “What makes you think I would leave you without a mother?” 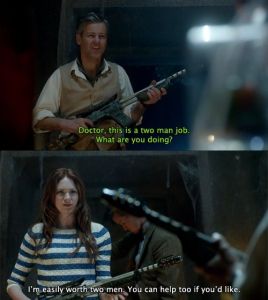 So by junior year, she poured the cultural Kool Aid down the drain, made several decent confessions, and accepted the Body and Blood of Jesus.  Peter’s great confession, “To whom else could we go, Lord?” sounded in her head more like, “If there were somewhere else to go, Lord, believe me:  I’d be there.  But you’re Truth, so I’m stuck.”

There was still one thing, though, that took a few more years to take, something she only learned while practicing True Catholicism.  It was the value of suffering.  She had suffered much in her life, and becoming Catholic did nothing to ease that.  It did, however, give it meaning.  Other faiths teach that suffering is to be avoided, ignored, or passed on to others (especially if you’re counting Western individualism as a religion).  Catholicism is the only faith that teaches that suffering has meaning and value and can be accepted with love for God and for others.

Suffering means that God loves us so much that he wants us to know the agony of his own heart.  It’s not about winning heaven, like some twisted martyr complex.  It’s about having faith and hope that we are loved in a relationship, that we get to give, not just receive.  We have the honor of loving God back.

So, yeah.  I’m that girl.  And, crap, I guess that girl’s Catholic.  Still.  So, however reluctantly most days, I run to God.

What’s more amazing is that he runs to me right back.

Why do you stay Catholic, when everybody else is leaving?  Blog it, and let Elizabeth Scalia know by tweeting at her @TheAnchoress.