It’s Thursday.  You know what that means? 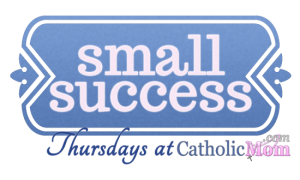 Go celebrate the good and link up with CatholicMom.com.

My first novel, Jane_E, Friendless Orphan:  A Memoir, is available for a Goodreads giveaway through tomorrow.

I have to admit that, ever since this book was turned down for the Catholic Writers Guild Seal of Approval, I’ve been reluctant to promote it.  I’m not ashamed of my work on this book or anything.  I just thought that since it didn’t make the SOA cut, that meant I just shouldn’t promote it.  However, in the meantime, I’ve heard other folks say that even Flannery O’Connor probably wouldn’t have made the SOA cut.  Then, while at the CWG Live conference earlier this month, I had a generous handful of readers come up to me and tell me how much they enjoyed this book… and none of them seemed to be prancing towards the gates of hell for having read Jane_E.  That and I had occasion to admit that still, eleven years after closing the first draft of this book, I will go back and re-read the last two chapters to watch Jane and Thorne get their just desserts…. so I’m re-promoting it.  If you like dark romance and dystopian futures but still prefer your characters to have (or grow) a moral compass, you might enjoy this one.

I have a novelette coming out!  It’s called Working Mother, and it’s my attempt to answer the question, “What if Mary, the Mother of God, had to get a job?”

I wrote it while working a series of desk jobs to pay for First Shift’s therapy and therapeutic activities, all the while feeling like a failure because I wasn’t the stay-at-home, homeschooling, warm-and-fuzzy mom that all good radtrad Catholic girls are supposed be growing up, right?  RIGHT?  So I was praying for our family situation to change and heard, “Go to Mary.  She’ll understand.”

I answered that voice, “Mary couldn’t understand.  It’s not like she ever had to go out and get a job.”

That other voice answered back, “Are you sure about that?”

Working Mother will be an ebook priced at only 99 cents.  Look for it this Holy Family Sunday.

There are two new Amazon reviews for Don’t You Forget About Me, both positive!

As someone whose love language is Words of Affirmation by an absolute landslide, this is balm to the weary soul. Especially balming (balmy?  enbalming?  No, that’s definitely not right…) is this review over at Our Hearts are Restless.  The author has offered to interview me, and I intend to take her up on that!  So go subscribe to her blog and stuff.

Speaking of other bloggers, last week I delivered a hard copy of DYFAM to Cristina at Filling My Prayer Closet.  She and Tiffany the Catholic Librarian are a pair of lay Dominicans (like yours truly), and they have teamed up to host a giveaway of said hard copy as well as a book club (am I giving too much away?  I hope not…) at their blogs.

Anyway, first, go subscribe to their blogs so you can be kept informed.

Second, Cristina has offered to form a Street Team for, well, um, me!  A Street Team is a group of readers who volunteer to help promote the stuff I write, and in return you get exclusive stuff.  We’re still in the planning stages, and frankly I’m in the “nobody’s going to want to do this for me, who am I kidding, I am delusional” stages.  Getting out of that last bit will be a feat.  The first step is to completely realize, “HEY! A PERFECT STRANGER LIKED MY BOOK SO MUCH THAT SHE WANTS TO ROUND UP OTHERS TO HELP PROMOTE IT!”

I reread that sentence, like, five times, and I’m still sitting here going, “Wait, seriously?”  Like I said, a feat.  But I’m all about feats, as you’ll see in Small Success #5!

Yesterday I took both shifts of kid into Center City Philadelphia to meet up with Barb of Cook and Count (whose blog you also ought to follow).  We’ve been friends for over a year now, ever since she was one of my roommates at CWG Live last year.

There she is, lay Franciscan that she is, embracing another lay Dominican.  Anyway, we kinda just hung out with our kids and snacked our way through Reading Terminal Market.  This is a success because Barb has known me for a year and still wants to hang out with me!  The other success though is that I feel like I’m teaching my kids something important.  All day yesterday, they watched their mom navigate public transportation in a busy city with only one flub-up.  I forgot one El stop didn’t have an underground bridge from the east side the the west side.  Oops.

First Shift has made it clear that they hate cities.  “It’s stinky.”  Keep in mind, this is coming from a pair of children who regularly have manure spread on the farm across the street.

I grew up in suburbia.  My high school friends lied to their parents that they were “going to Erin’s house,” when really they were coming to my house to get dressed in going-out clothes so we could walk to the train into the city.  And it’s not like we were going into tough neighborhoods or anything.  We were just growing in the confidence of being able to navigate public transportation without looking like incompetent tourists.  Today I am grateful I can offer my kids the example of a mom who can drive in the city or not.  It is my hope that, stinky or not, they aren’t afraid of going to places that are bigger than our block, because they see me taking them there without fear.

That and it was nice to take my kids somewhere that they have the accents and I’m the one who sounds right asking for “four bottles of wooder.”

I have been dreading starting up hardcore homeschooling again.  My biggest fear isn’t that they’ll fall behind academically.  No, my biggest fear is that I won’t be able to handle another year of the demoralizing complaints and anxiety-ridden freakouts that come from my children, all while getting little to no positive feedback from anyone.  See above where I admitted I need Words of Affirmation to thrive?  Homeschooling provides little to none in the here-and-now.  I put a lot of effort into modeling how to give positive feedback.  I do it for others every day.  Every.  Day.  But just like I model good table manners and still have ten year-olds who can’t eat without getting food all over their faces… they’re just not intuiting it.

Colleen Duggan wrote a piece that very closely mirrored what I have been feeling.  Though I admit my dread isn’t, “Can I educate them?” It’s, “Can I survive educating them?  I am not strong enough.  I will break.”  Still, Colleen’s piece about pushing against the stone spoke to me.  I won’t see the long-haul benefits until I’ve been in this for the long haul.

Speaking of long(ish) haul payoffs, First Shift of Kids is comprised entirely of competitive figure skaters.  After over a year of training, on Tuesday they passed their first figure skating test!  For them that means they learned a long, complicated pattern of moves to perform for a judge, that judge thinks they did well enough on those moves to compete reasonably against other skaters who can perform those moves.  Oh, and now they can move on to learning jumps and spins.  For me, this means NO MORE EARLY MORNING ICE TIME!  They’ve “leveled up” such that they can practice in the afternoons.  ::happysigh::

Hooray for successes, large, small, and all points in between!