Pack your sleeping roll and join Jennifer and the rest of us happy campers over at Conversion Diary for 7 Quick Takes Friday!

ETA:  I’d love a copy of Jennifer Fulweiler’s Something Other Than God, myself having come (back) to Catholicism from atheism, though at a younger age and through a much faster route than blogging.  If you mention where to buy this awesome-looking book in your 7QT post…

So, here’s where to buy Something Other Than God by Jennifer Fulweiler.  You’re welcome.  🙂

I thought I was on fire with my last 7QT. Boy howdy, was I wrong! We just came back from a girls-only camping trip. See, I have a publisher interested in this idea for a series of books that encourages girls to learn the kinds of skills Mary would have needed to make her journey to visit—then help—her pregnant kinswoman Elizabeth. For instance, Mary probably didn’t know how to throw a tea party, but she sure as shooting knew how to cook over an open fire. She may not have known how to knit lace for her hankies, but there’s no doubt she knew how to turn mere fluff into clothing. Same goes for Elizabeth. Same goes for centuries—no, millennia—of girls who went before us.

Don’t get me wrong: I love modern technology and wouldn’t give away my smartphone, my blog, or my water heater without a fight. Still, we women have gone from being the most vital part of our communities—being the source of our most basic human needs for food, clothing and shelter—to being told we can’t make our own crumb topping for a casserole without professional help. Basically, we’ve been convinced that we’re incompetent. I’d put down real money that a girl who grows up feeling incompetent will become a woman who thinks she can’t handle life without a man (or some kind of romantic stimulation), can’t handle a crisis pregnancy, or can’t survive without destructive substances.

So here I am, starting on a project I’m calling First Disciples: Amazing Skills for Strong Catholic Girls. Truth be told, that might even end up being relabled “for Strong Christian Girls,” because the more I think about it, the more I can see these skills as a meeting place for us with our separated sisters in Christ.

Anyway, through these books, girls (and their moms) can learn things like how to take fluff and turn it into fabric, how to cook over a fire made without matches, and how to be of service to pregnant women and others in need. As I draft the books, I’ll be testing out the activities with my own daughters, of course. I’m also looking for beta-testers. If you’re interested, comment below to join First Disciples Team Beta.

So, back to the camping trip. Before we left, First Shift and I read lots of books about wilderness survival, camp craft, and so on. I watched several YouTube videos about making fire without matches. Additionally, the Easter Bunny brought me one of these:

Not the kid, the thing she’s holding.

It’s a flint and striker, the modern-day version of the kind of thing first century people would’ve used to star their fires. At first I thought they might have used something like a bowdrill, but in the process of researching I discovered that wood was so scarce in first century Mediterranean lands that it wouldn’t have been wasted on a bowdrill when you could serve the same purpose with a rock and a bit of metal. Our goal for this trip was to make at least one fire without matches. Did we reach our goal? Read on to find out what we learned about fire.

Every knee will bend—even mine. You can’t light a fire unless you’re close to it. I’m obese, out of shape, and have had arthritis since I was 15 and an in-shape size 7/9. The fire doesn’t care. Every time I tried to light a fire with my butt in my camp chair, I failed. Matches or striker: it didn’t matter. I had to humble myself, accept the necessary pain, and get on my knees to light that fire.

You can’t be afraid to get too close. The few times I was able to get a spark to light on a bit of dryer lint or cotton ball tinder, I got up from my aforementioned knees. I thought, “Hey, I made fire! I can back off a bit.” Then what happened? Poof. Bye-bye, fire. Not only did I have to get back on my knees, but I had to touch burning things with my bare hands to have a fighting chance of keeping those flames alive. I had to quiet every piece of pyrophobic anxiety screaming inside of me and nudge that smoking sawdust with my fingers to get it closer to ignition. How many fears must we face in order to get close enough to where God wants us to be lit and warmed with His fire?

Keep breathing. “It’s going out. It’s going out! There. It’s out.” I lost count of how many times I heard the elder member of First Shift say that. I had to keep ignoring her natural negativity (and my own) and breathe on those smoldering embers, always at least three times. Trying to imitate me, First Shift would collectively give one gasping puff at the fire and say, “See? It’s out.” “Try three breaths.” And they would. And soon we’d have a fire again. Trying just once never worked. The fire needed as much breath as we could give it in order to get started. 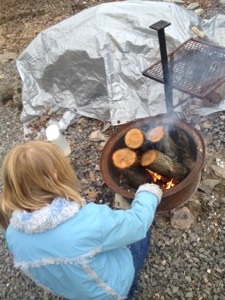 Never assume you’ll fail. I’d tried twice already to light the fire with the striker. Both fledgling fires had expired within two minutes. I decided to try a technique I’d seen on those YouTube videos: wrap your tinder in a nest of kindling, then once the spark catches, carry the whole nest (insulated in kindling) in your bare hands into the pre-built fire fuel. I’d failed so much that I didn’t think it would work, even with the extra help of the kindling nest. So I built my kindling nest RIGHT NEXT TO THE WOODPILE. I hit the striker once, twice, a third time, and within three seconds?

Embers spilled out of the kindling nest faster than I could pick the thing up. Fire fell into—and under—the waiting woodpile, and of course it all caught. The Holy Spirit intervened and kept the group’s collective generalized anxiety at bay as we laughed and ran to refill our water bucket.

Do you need me to explain this to you? Don’t assume you can only fail. Assumed failure, it seems, can be dangerous.

The fire only comes if you’ve made a place for it: or, some things have to be believed to be set on fire. The woman in this video about using a bowdrill says something to that effect. You know what? This proved true on our trip. If you’re embarking on any journey of faith—whether writing a novel, planning a blog tour or thinking about homeschooling—you won’t see the bridge through the fog unless you step towards where the bridge will be. In other words, first build your fire, then strike your first spark.

Forget the spots on the clean, white milk jug of your soul. Think fire instead. Just last week, I’d found myself at a loss for images to use when teaching our kids about the difference between venial and mortal sins. I know the “pure white milk jug” image has its shortcomings, so I’d always used the idea of building a wall between ourselves and God. A venial sin is a single brick. A mortal sin is an infinitely long, infinitely high steel-reinforced concrete slab. Even that, though, seemed to have its limitations. Then we spent two days working with fire. After all the trouble we’d had starting fires, we decided to keep our one lunch fire going through dinner time so we wouldn’t have to start over again. We might have neglected it a few times so that the ashes covered the embers, but with just a little tapping and stoking, maybe an extra log, it came back full force rather quickly. However, if we let it go out completely, or worse doused it with water until it was no longer even steaming… do you see where I’m going with this?

You’re always on my mind. Even with the huge log pile the campground provided on our arrival, we still needed to be on the constant looking for firewood. On our hikes in the woods we were looking for kindling. At the playground, we scavenged under the red pine for winter-scattered needles. Wandering to the bathhouse, we picked up sticks. This one vital task took up so much of our mental energy, even when we weren’t actively working with our fire. Think of all the other jobs that women have had through the centuries that occupied our minds from the moment we woke to the moment we rested. I’m often down on myself for being so obsessed with food (see above re: admission of obesity). This camping experience helped me to see that such a thing may be hard-wired into my brain for the sake of survival. God put it there for a reason, and knowing this has helped me forgive myself a little bit for, well, being who I am, concupiscence and all.

Do you have girls ages 8-15? Would you be interested in joining the First Disciples Project Beta Tester Team? Leave a comment below and we’ll be in touch!