A Subtle Grace on Kindle:  Ellen Gable‘s latest historical romance is now available on Kindle!  I was privileged to read a draft in earlier stages, and I am confident in saying that the final version (available now on Kindle, in print in a few weeks) is a rip-roaring, tug-at-your-heart, whitewater rapid ride through the life and heartbreaking misadventures of Kat O’Donovan.  I have a review copy waiting for me, so I’ll leave you with that.

Never Let Me Down Again update: I really need to buckle down on getting this sequel written.  Every Friday until the first draft is completed, it is my aim to post seven lines that I’ve written on NLMDA.  They’ll be out of context and thus spoiler-free (though you might meet some new characters along the way).  I’ll start with my favorite:

“Okay, well, is there any headway on the video game deal?”

“That’s actually why I was calling.”

“You weren’t calling to listen to a breast pump misfiring in the background?”

Can you bully a celebrity?  I realize all the hubbubb has long since died down over John Travolta’s gaffe at the Oscar’s over the pronunciation of Idina Menzel’s name.  However, this has been weighing heavily on my heart, so I’m going to put it out there. It’s topical to this blog, as Don’t You Forget About Me deals with the topic of the scars left by bullying. 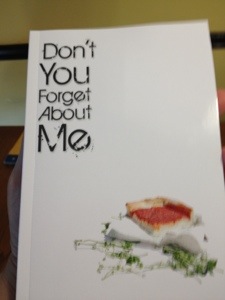 Look, people, a bully is someone who gets satisfaction from making fun of someone who isn’t going to fight back.  If you go and “Travoltify” your name or make other jokes about the guy, John Travolta is not going to fight back.  This time, it’s not because the target of the bullying is too weak or cornered to get back at you.  It’s because he’s too successful to bother finding you and fighting back.  I’ve heard that the guy might even be dyslexic.  So you’re going to make fun of someone with a learning disability (or not–it doesn’t matter) for being successful enough to be asked to introduce another successful artist on the Oscars?  That says nothing about John Travolta, but it says an awful lot about you.    /rant

Cryptography & Charlotte Mason:  We are so close to the end of our homeschooling year that I can taste the salt breeze of our first day on the beach while other kids are still in school.  The problem is that we are running out of steam, and when that happens, the first thing to suffer is math.  We use a rigorous math curriculum that is pretty much the only thing that sticks out of our Charlotte Masoning like a sore thumb.  After talking to some other homeschooling moms yesterday at our one club’s annual speech party, I’ve come to realize that my kids just don’t care about math, and that’s got nothing to do with them. It has everything to do with the fact that I’ve spent 10 years telling them to ask “why” about everything but never giving them an opportunity to ask “why do we need to know this math thing here?”  So I’m aiming toward taking a break and doing more real-life math.  Today we’re going to start making tiered skirts from ripped jeans, and First Shift of Kids (10yrs) will be doing all the calculating of fabric needs and costs.

Scattered Thoughts of A Crafty Mom

After that I want to introduce them to some practical cryptography (aka leaving your sister notes that your mom probably can’t read).  We already read plenty of books in which characters know how to sew.  Can anyone recommend any books where kids use cryptography?  KIDS, people.  The first person to recommend Cryptonomicon for my tweens will get a smack upside the head.

MOMS Club(R):  Today I’m hoping to make some headway as the publicity person for my local chapter of MOMS Club(R) International.  I originally joined because I wanted to find playmates for Second Shift of Kid, a singleton six years younger than her siblings.  I kept hearing about “all the friends you’ll make through the club!” Honestly, I brushed that aside, thinking, “Pft.  I have friends.  I need friends for my kid.”  Then, as the years passed, I noticed that it would sting particularly badly when I saw myself getting left out of social stuff the other club moms would have to which, through pictures on Facebook, I’d find my child and I had not been invited.  Now, as our club struggles with dropping involvement, I find myself saddened.  Hm.  Maybe I had been hoping for friendships of my own and hadn’t put myself out there, knowing how hard a time I typically have making and sustaining female friendships.  Anyway. /pondering

Lenten Anemia: Speaking of failure, ever since Lent started, I have found myself more exhausted than I’ve ever been, and I’ve been suffering fatigue off-and-mostly-on since 1989.  At first I thought it was a bit of seasonal affect disorder that would disappear once the snow pulled back some.  It’s even gotten to the point that–GASP!–I’m thinking about going to the doctor, which life has since taught me that going to the doctor with a complaint of “fatigue” is just about always a fatiguing waste of time.  Then I was talking to another mom who happens to be a nurse, and she suggested I ask specifically about anemia.

Duh.  It started right when I dropped meat all but out of my diet.  Crud.  So.  Pray for me as I see what happens by adding more leafy greens and what beans I can tolerate into my diet.

Money is tight.  Please buy a copy of Don’t You Forget About Me.  Already did?  Please leave a review encouraging others to buy it.