Hi! It’s my first time joining up with 7 Quick Takes Friday, hosted by Jennifer over at Conversion Diary!  Care to join in?

If I do something wrong, here, let me know, but be gentle.

We have finished our first year of homeschooling. In honor of this momentous accomplishment, allow me to share with you what have been universally discovered (okay, by “universally” I mean simultaneously by myself and several other people) as…

The Five Stages of Homeschooling

(with all apologies to Elisabeth Kübler-Ross)

Stage 1 Homeschooling is wrong and bad and wrong, and nobody should ever homeschool their children.

Stage 2 Okay, so I can see why some people homeschool, but I am absolutely confident that it would never be right for my family.

Stage 3 All right, so I can see how my children would really do better if they were homeschooled, but there is no way that I could ever do that.

Stage 5 Everybody should homeschool.

Personally, I’m somewhere between Stages 4 and 5. This year was great, and First Shift of Kids did a WONDERFUL job. We are adding some preschool activities next year for Second Shift, leaning heavily on Feast Days & Holidays by Joan Marie Arbogast . The biggest surprises have been that my poor math skills have not impeded their progress, and they have grown more socially this year than in all the years previous. Kidding! Kidding.

I am hoping to finish the current round of edits to my novel, Don’t You Forget About Me, due to drop All Saints Day 2013. I’ve been calling it an “NFP Murder Mystery.” My publisher calls it “Theology of the Body suspense/romance.”

On that note, I’ve been “writing in my head” on three separate projects: two short stories and the sequel to Don’t You Forget About Me. All of the chapter titles from DYFAM are the titles of ’80s songs, up to and including the first half of 1987. The sequel, tentatively titled Never Let Me Down Again, is going on the same path, only focusing on songs later in the ’80s, up to and including the first half of 1991. I’m already pretty sure the first chapter will be called “Just Like Heaven.” I also have “Bizarre Love Triangle,” “Cuts You Up,” “Heaven Knows I’m Miserable Now,” and even “Every Rose Has Its Thorn” on my list, just to name a few.  I keep trying to justify “Rock Lobster,” but nothing’s coming to mind.

What are your favorite songs from those days?

–4–
We are working on potty training Second Shift of Kid. Aren’t you glad I didn’t list that as #1 or #2? We went from more accidents to success to equal numbers of each.  Progress.
–5–
I finally have taken a fresh plunge into veiling territory. I can sew, so I threw together a little triangular lace number that does the trick. 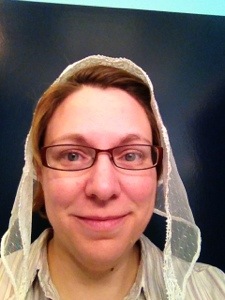 Pros: I have VERY fine hair (I’ve yet to meet a hair stylist who doesn’t bemoan my hair as “filmy”) and between using a wide band of heavy cotton at the front hem and keeping the rest of it very light, it stays on even my head, even through bowing before the Eucharist and otherwise wrangling Second Shift. On the spiritual side, our parish is very much a ripped-jeans-spaghetti-straps-bring-your-Dunkin’-Donuts-coffee-to-Mass-with-you kind of place. Needless to say, I’m the only veiled one there. I do get stared at. However, because my veil is so physically heavy, I do feel the parallel of God’s protecting hand on my head while I worship. I also found myself experiencing a more palpable compassion with those who get stared at for those non-optional reasons that I don’t have: the cancer survivor whose head wrap covers what radiation took from her; the man who can’t hide his cochlear implant; the mom whose kids are screaming to the chagrin of Little Old Ladies Whose Kids Never Behaved THAT WAY. I’d go on, but then this would become 7 Long and Agonizing Takes.

Cons: There is the Italian Widow look that just does not work for my giant Viking-Irish frame. I’m experimenting with something a little more “me” than knit cotton lace and point-d’esprit.

–6–
In future weeks, look for a post on venturing into hostel territory.
–7–
I was excited to find the trailer for the upcoming Rich Mullins biopic. I remember being a fledgling revert to Catholicism, still thinking, “Maybe I’d better go to a nice, respectable, non-denominational church near my college. I’m not sure I’m ready to be hated this much.” Then a Christian buddy played A Liturgy, A Legacy, and a Ragamuffin Band on his car’s tape deck. I remember hearing “Creed” and thinking, “This guy is Catholic. Does he know it yet?” That small moment gave me courage–just the thought that a talented, respectable man could even consider the faith in with which I was about to throw my lot. Even in his choice to sing “one holy church,” I could feel that tension of wanting to follow but wanting to make sure it was faith leading and not something else.  Anyway, Rich Mullins gave me that last shard of courage I needed to be what God was wooing me to become.  Rich Mullins was–is, I hope–the kind of Christian, the kind of Catholic I want to be.

So there’s my first 7QT! I’m still interested: You in the 80s? Big Hair or Skater Hair? GNR or something a little more like this: 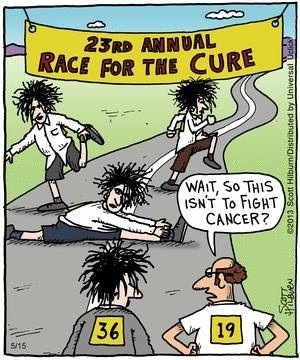